Ask for a session
Roles
Search
About
Services
Get in touch
Resources
Ask for a session
Search
Menu
Human
Coach
Entrepreneur
Scientist
01/
About
Services
02/
Resources
03/
Roles
04/
Get in touch
05/
Email
06/
Linkedin
/
1/ Human
2/ Coach
3/ Entrepreneur
4/ Scientist
I am ready for a long road flight for work with a week- or months-long projects.
#5
16/05/2022

No Bad Parts by Richard C. Shwartz: Summary and Notes 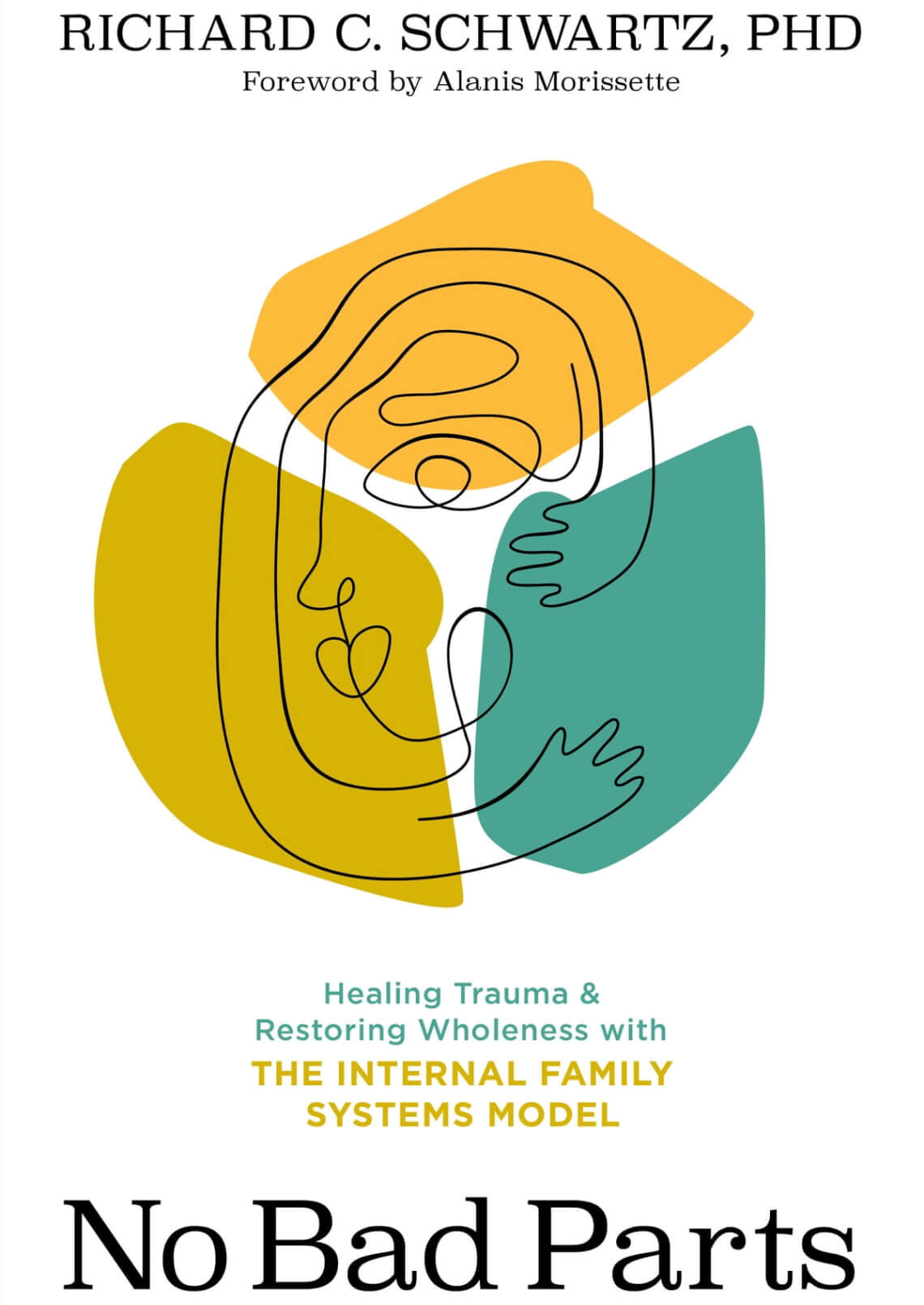 No Bad Parts is a marvelous book, and by the time you are done reading this summary, you will know why. The author, Richard C. Shwartz, is the pioneer of Internal Family Systems, a revolutionary therapy procedure based on the belief that the mind is made of parts ( hence internal family systems) and is not a single unit — mono-mind — as we have been led to believe by previous schools of thought and various religious traditions including Christianity.

Schwartz's big idea is that if we can understand our parts, talk to them and embrace them, we can heal the self and the world. The different parts of our brains need love, no matter how bad they are. For instance, the critical voice that rises in your head is looking to protect you and if you can show it love rather than wish it away, it will transform into a supportive character within the family of parts that make up your mind.

There is a lot to learn from No Bad parts by Schwartz and so I have prepared five lessons that resonated the most with me.
#1 The mono-mind

Schwartz says we have been raised to believe that the mind is a single unit from which emotions, urges, and impulses emanate. But such is not true; instead, the mind is made up of distinct parts that play different roles throughout our lives. He puts it best when he writes:

“All of us are born with many sub-minds that are constantly interacting inside of us. This is in general what we call thinking, because the parts are talking to each other and to you constantly about things you have to do or debating the best course of action, and so on. Remembering a time when you faced a dilemma, it’s likely you heard one part saying, “Go for it!” and another saying, “Don’t you dare!”

In people with multiple personality disorder, the parts have been blown out of proportion by trauma but their diagnosis only confirms what Schwartz thinks of everyone else i.e. we all have multiple personalities. Because of the mono-mind paradigm, we have come to fear our parts and view them as pathological, and in our attempts to tame them, we create internal conflicts that only make matters worse. Schwartz also observes that the harder we try to get rid of parts, the more we fail because parts like people fight back when pushed to a corner. So, the solution is to embrace them.

“The mono-mind paradigm can easily lead us to fear or hate ourselves because we believe we have only one mind (full of primitive or sinful aspects) that we can’t control.”

Embracing our emotions, regardless of their nature is something I learned from Radical Acceptance. In the same way that Schwartz says that parts are blameless, and sacred, Tara Blanch says that we should accept all our emotions with an open heart. The two authors say that doing that is the path to enlightenment and healing.
#2 No bad parts


When Schwartz says there are no bad parts, he means that even the parts we regard as hateful are sacred and just looking out for you. He writes:

“Parts are not what they have been commonly thought to be. They’re not cognitive adaptations or sinful impulses. Instead, parts are sacred, spiritual beings and they deserve to be treated as such.”

In other words, even the destructive parts have protective intentions. And while you might think that the mind of someone like a serial killer is irredeemable, the parts that comprise it are just as sacred as those of anyone else.

“It turns out that parts aren’t afflictions and they aren’t the ego. They’re little inner beings who are trying their best to keep you safe and to keep each other safe and to keep it together in there. They have full-range personalities: each of them have different desires, different ages, different opinions, different talents, and different resources. Instead of just being annoyances or afflictions (which they can be while in their extreme roles) they are wonderful inner beings.”
It is a powerful idea that calls upon us to love not just the self but everything in existence.

Indeed, Schwartz spends a considerable amount of his time explaining how love is the solution to the internal family problems and as an extension the external world. He says that if we could heal ourselves internally — by embracing our parts — we can create a better world for everyone. The following quotes best captures this sentiment:

“Once we shift paradigms to the knowledge that, at their essence, everyone is decent and kind, we can reorganize our economic systems, schools, and prisons.”

He also notes that the secret to happiness is realizing we are not the parts that define us but a Self “that’s curious, calm, confident, compassionate, creative, clear, courageous, joyful, generous, and playful”

He contends that the world needs a new paradigm because IFS has the potential to transform not just individuals but whole societies. The first step is to unburden the parts because they hold on to traumas that make them act the way they do. By unburdening parts, they return to their original valuable selves.

There are five things to know about parts:
#3 We all have a Self that is pure and capable of self-healing

Schwartz says that we all have a self that is pure and capable of self-healing. He likens it to what Buddhists call Buddha-nature. On the topic he writes:

“…the Self is in everybody. Furthermore, the Self cannot be damaged, the Self doesn’t have to develop, and the Self possesses its own wisdom about how to heal internal as well as
external relationships.”

The way to reach the self is by embracing what Schwartz calls exiles or the parts that we abandoned long ago. This, of course, only happens after we can unburden the parts. Schwartz gives the example of an addict and says they indulge in alcohol and drugs, or at least the part that does, because it's playing a protector role. The part protects the individual from severe emotional pain or even suicide. If everyone understood this, we would be more compassionate towards the individual.

“Once we heal our exiles and become more Self-led, we don’t have to work so hard to do things that are good for us—we just naturally enjoy them.”

What happens when we become more Self-led? Schwartz says the Self senses Self in everyone else and, because of this, has a deep sense of connectedness. Understanding this brings us to the four goals of IFS according to Schwartz: They are:

#4 We are all connected
According to Schwartz, the Self is connected to everything in the universe. This realization is a feeling one gets when they have resolved all the differences between the parts and unburdened them.

﻿“....when you experience Self, you naturally feel more connected to humanity in general, and also to something larger and more encompassing —the Earth, the universe, the big SELF, or whatever your experience of this is. In other words, once in Self, you feel less isolated and lonely.”

The self can also be described through the 8Cs of self-energy and self-leadership. They are:


Depending on how your parts are unburdened you are, you can access each of these Cs and live a more fulfilling life.
#5 Becoming Self-led

When the parts have given up their protective roles, and the exiles have been embraced, the individual starts a new chapter in life i.e. they become more Self-led. It is a journey that begins with earning the trust of your various parts.

Schwartz says most of the parts that make us act out took hold during our childhood when we couldn't defend ourselves against abuse by friends and family. Because the child's mind had not developed the capability to defend itself, the parts took over and have remained that way.

To heal and develop self-leadership, you have to earn the trust of your parts by showing them you are capable of handling whatever the world throws at you. The exercise is not an easy one because it also means confronting childhood traumas, and forgiving yourself.

In the book, Schwatrz also gives instructions on how to meditate and to get to know your parts better and develop relationships with them.
The following are some of my best exercises:

No Bad Parts by Richard C. Shwartz, is a transformative book that challenges many beliefs about the mind. IFS has the potential to not just individuals like me and you but entire societies as it is premised on the idea that we are all good.